A, B, C, D…we have 26 alphabet characters in the English language. We have 2 versions of each, upper and lower case. That gives us 52 characters from which to form words. This is the data.

But have you ever wondered where “upper and lower case” came from?

In the early days of printing, each character was represented on an individual block called a sort. Character sorts were selected and placed into composing sticks. Typesetters would select the characters from a case containing the sorts. Capital letters were stored in the back of the tray, as they were less frequently used. Trays when pulled out would be set upright so the capital letter would be on the top side, hence “upper case”. This is the story.

In many cases where we have data we are prone to share the facts and figures and expect the listeners to paint their own story as to why the data is important. In some cases, they may get it right. But when they get it wrong, when it’s not the story we appreciate, we get frustrated.

This is often due to “the curse of knowledge” which is the title of a post dedicated to this topic. We know the data and story so well we can’t imagine someone not seeing it as we do. Remember:

It’s not what you say that matters, it’s what people understand that matters.
So if your listener doesn’t understand, it’s not their problem…it’s yours.

At other times, it’s just because we know the data and haven’t imagined the story. If you are presenting data in an effort to get someone to make a decision, this is most likely not going to work. Simon Sinek in his very popular “Start with Why” TED Talk explains that people don’t make decisions based on what you do, but rather based on why you do it.

We have great data and powerful insights that can help shape life on this planet. But it’s our, it’s your responsibility to leverage that data in a way it has impact and meaning. Stories help you do that.

If you are wondering what that looks like, I point you to the late Hans Rosling who passed in 2017. His “Best Stats You’ve Ever Seen” TED Talk is considered to be one of the most informative and enchanting performances of data. If you watch his video you will see how he uses tools of storytelling, like dialog and flow of events to make the data jump off the screen and into the minds and memories of his listeners

So if you are a data scientist, my hat is off to you. Your curiosity and analytic skills are key to understanding the almost infinite amount of information available to each of us. Your observations and findings are incredible and important. I challenge you to not leave it there. Behind the data there are great stories as to why it’s important. So when you are sharing, start with why. Tell a data illustrated story.

If you have any questions or comments on this, please let me know.

Please note: I reserve the right to delete comments that are offensive or off-topic. 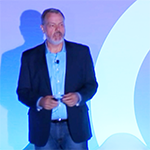 I've been privileged to have journeyed through large and small organizations in over a dozen industries. And during those global experiences I frequently observed well-meaning individuals and organizations, who had amazing products, services and ideas, fail to effectively communicate to the audiences entrusted to them. For that reason, I consider it an honor to offer my assistance, insights and coaching to anyone who is willing to invest time and attention to discover, develop and deliver their amazing story.

Some of my ideas